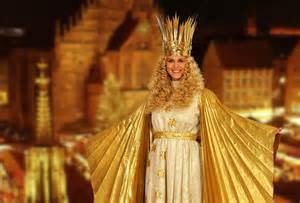 Advent or die Vorweihnachtszeit, the time leading up to Christmas Eve, is a very special time for children of all ages. On December 1 children open the first window of their Adventskalender – often filled with chocolate – to shorten and sweeten the waiting period until the Christkind brings presents on December 24, Heilig Abend.

The Christ child – das Christkind – has been bringing the gifts in German-speaking countries in Europe and around the world since the late 16th or early 17th century. Paintings and older postcards show the Christkind as an angelic figure with blonde curls and wings.

The Christkind came about at the time of the Reformation. Before then Sankt Nikolaus, a saint and bishop from Myrna, Turkey used to bring gifts to all children who had been good throughout the year.  Since Martin Luther thought it blasphemous to idolize saints other than Jesus himself, his newly found Protestant church had the Christ child bringing gifts to the children. But St. Nikolaus did not go away. Over time he started to bring small gifts during the early morning hours of his name day (December 6) and filled clean boots left on the doorstep with nuts, oranges and chocolates. St. Nick’s image became more secular, until he became the Weihnachtsmann (Father Christmas) in Germany. More and more the bishop of Myrna’s Christian apparel started to look a lot like the Santa Claus figure known in the United States.

After WWII when Germany was split into two separate states, the socialist party in East Germany would no longer allow a religious entity to bring gifts to children at Christmas. Therefore, the Russian fairy tale figure of Väterchen Frost (Jack Frost) became responsible for bringing gifts to children in the former GDR.

Nürnberg was one of the first cities to reopen its Weihnachtsmarkt in 1948 after the end of the war. For the first time a Christkind officially opened the market from the outside gallery of the Frauenkirche underneath the Maennleinlaufen. Until 1969 an actress was the Christkindl; now a teenage girl depicts the Christkindl. The Prolog that she announces to the world has changed little over the years. Her dress is modeled after that of a Rauschgold-Engel. Legend has it that a doll maker from Nuremberg made an angel out of the thinnest brass paper to please his sick daughter. In the late 16th century it was chosen as a symbol for the Nürnberger Christkindlesmarkt. 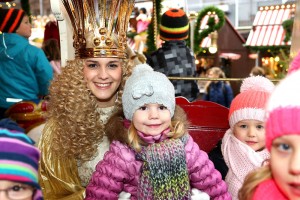 Children have their pictures taken with the Christkindl and tell her what gifts they would like for Christmas, much like American children when they visit Santa Claus. Although gift-bringers have been commercialized over time, tradition in most German families is very important, and the Christkind is still much loved.