The end of the year in Germany is marked by great parties, outrageous fireworks in private and large municipal displays, and a series of traditions, depending on age and location, and, last but definitely not least,  by the Neujahrsansprache (New Year´s Address) by the German Chancellor on the first day of the New Year. 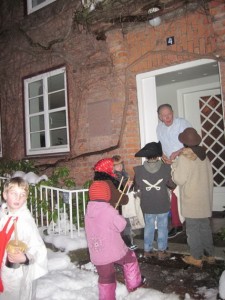 In Northern Germany you might encounter small children in costumes or oversized hats and shoes (borrowed from their parents), knocking at doors and singing songs in Plattdeutsch (low German/low Saxon). The older children add some chocolate to their holiday stash with the Rummelpottlaufen/Rummelpottlopen (literally: rumbling-mug-walk), named after a small noise-making instrument that supports the singing of the little ones while they walk, and the mug to collect the sweets. While the Rummelpottlaufen is somewhat overshadowed by the growing popularity of Halloween, some children play it safe and simply do both. 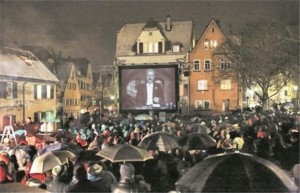 Students and nostalgic people of all ages watch the classic comedy Die Feuerzangenbowle at public viewings in the universities, the festival in Tübingen, or at home. The title of the 1944 movie literally means “fire-tong punch” and refers to the drink of the same name. Similar to cult movies, such as the Rocky Horror Picture Show, there are special rules if you plan to attend a run of Die Feuerzangenbowle: you must bring a mirror, an alarm clock, sparklers, and a mug full of Feuerzangenbowle to use during the appropriate movie scenes. 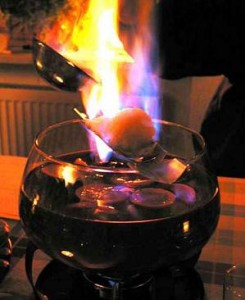 Many Germans consider the preparation of this traditional drink at Christmas or New Year`s Eve as entertaining as its actual consumption. A Feuerzangenbowle is prepared by suspending a six-to-seven-inch rum-soaked sugar loaf over a bowl of mulled wine heated by a rechaud; the sugar melts slowly into the wine, and makes for quite a potent drink.

On the last day of the year it is obligatory to watch the comedy sketch Dinner for One on television. The sketch is considered the epitome of British humor and style in Germany, but is almost unknown in Britain.  It was never shown in Canada or the United States , but is regularly televised in several other countries. This does not, however, impact the popularity of Dinner for One in Germany: nowadays generations watch the classic together, people easily quote the lines (“The same procedure as last year?”) and friends might gather to combine a watching of the movie with the joy of cooking together and creating the complete meal of the play (Mulligatawny, North Sea Haddock, and Chicken). 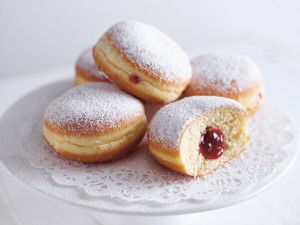 On New Year´s Eve, small marzipan pigs, are exchanged for good luck, and many bakeries provide jam-filled doughnuts topped with powdered sugar, which, in addition to culinary pleasure, represent German dialects: generally in Germany they are known as Berliner (Berliners), except in Berlin and Bavaria. People from Berlin refer to them as Pfannkuchen (German filled pancakes) while Bavarians call them Krapfen (deep-fried, similar to a Krispy Kreme doughnut). 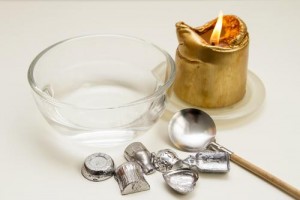 During the evening of December 31, young and old together might also enjoy Bleigiessen (“lead pouring”), where hollow lead is melted over a small flame and poured into a bowl of cold water. The resulting shape is held in front of a candle light and interpreted for fortune-telling according to a handbook or by visual association. One might also literally jump into the new year if one lives in the Erzgebirge region, where, when the clock strikes twelve, people used to end the old year with a Glückssprung (literally: jump for luck) by jumping from a chair or table, thus hopping and hoping for health and prosperity.

However you choose to spend New Year’s Eve, we wish you: ein Frohes Neues Jahr!