It is time to celebrate in Germany – again! Karneval or Fasching– also referred to as the “Fifth Season” is about to start, leading to its high points during carnival weekend, on Rosenmontag (the Monday before Ash Wednesday), and Faschingsdienstag (Fat Tuesday) until midnight, when Lent begins with Aschermittwoch (Ash Wednesday). The word Karneval is said to be Latin-based from carne (meat) and possibly levare (leave), indicating “leave meat,” “away with meat.” The word Fasching dates back to the 13th century and is derived from the Germanic word vaschanc or vaschang, meaning Fastenschang, the last serving of the alcoholic beverages before Lent. 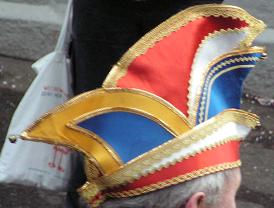 The carnival season starts officially before Christmas, on November 11 at 11.11 a.m. (am elften elften um elf Uhr elf). That is when “Council of the Eleven” (Elferrat – eleven, sometimes more, people chosen from an area’s various carnival associations) meets to discuss the activities for the next season. The members of this council wear fool’s caps (Narrenkappen) as their official headgear. Carnival is temporarily suspended during Advent and Christmas but picks up in earnest right after Dreikönigstag (Three-Kings-Day/Epiphany) on January 6. 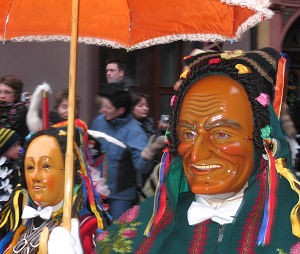 People in Germany have been celebrating this season since the Middle Ages. But even before that heathen rituals were performed to end the winter (especially in southwestern Germany and Swabian-Alemannic regions). This version of the carnival season – referred to as Fastnacht (eve of lent) – sports some unique customs and characters. Wooden masks are worn in an effort to drive out the evil spirits in the dark of the winter. In Rottweil, Baden-Württemberg they celebrate a very famous Fastnacht known as Rottweiler Narrensprung (fools’ jump), a traditional parade, in which only native-born persons from Rottweil or those who have lived there for ten years or more, may participate, and their costumes must follow strict traditional guidelines.

Along the Rhine River in a mostly catholic region, Duesseldorf, Cologne, and Mainz are famous for their parades and costume balls. The most popular and largest parades held on Rosenmontag (Fat Monday) are televised for the whole nation. Clubs organize special evenings, so-called Magnificent Carnival Sessions (Prunksitzungen) with performances of dance, comedy, special songs, and satiric speeches (Buettenreden), mostly in rhyme. There are no taboos in Buettenreden, and nobody is safe: the most outrageous statements about politicians, politically incorrect statements about minorities, sexual preferences – all are said openly, and have no consequences. These satiric speeches during carnival were the only freedom of expression for the people during the reign of the nobility.

An insider tip is Fastnacht in Franken, a Magnificent Carnival Session in Veithoechsheim with particularly clever performers. If you speak German, take a look at the Altneihauser Feierwehr Kapell’n at http://www.br.de/mediathek/video/sendungen/fastnacht-in-franken/altneihauser-feuerwehrkapelln-fastnacht-100.html. 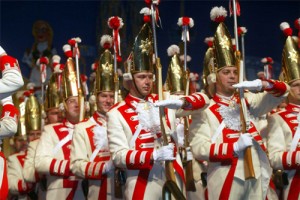 The Catholic Church tolerated almost immoral behavior of the faithful as a compromise before the period of fasting or Lent. The normal order of things was reversed, drunkenness and partying was suddenly accepted and even the nobility was openly satirized. Pre-lenten celebrations were popular even before the Rhineland was occupied by the French in 1794. The French occupiers banned the wild celebrations; the ban was not lifted until 1804. After the French left it was a good excuse to mock them with military-like parades and soldiers-like uniforms and later also the Prussian military (when the Prussians governed the region along the Rhine).

Celebrations of Alt-Weiberfastnacht (Old Women/Crone’s Day) on the Thursday before Carnival Tuesday (Fat Tuesday) (also known as Schmutziger Donnerstag = Fat/Greasy Thursday) began in 1824 when washer women celebrated a “workless day” to strengthen their presence in the mostly male-dominated carnival season. You can watch a women in black storming City Hall in Cologne and demanding the key to the city from its mayor on German television. On the streets “wild” women in costumes cut men’s ties and are allowed to kiss every men who passes them by, not only in Cologne.

Carnival celebrations culminate on the weekend before Ash Wednesday with parades. One of Germany’s best known parades takes place on in Cologne. Over 11,000 Jecken (members of the various carnival clubs) march in a parade that stretches to almost four miles. Leaders of the Jecken are the so-called Dreigestirn, a triumvirate of three select members of the Cologne Carnival Associations. Since 1871 the head of that threesome is Prinz Karneval, symbolizing the highest representative of the Magnificent Carnival Session. He dresses like a historic royal. The Bauer (peasant) symbolizes the resistance of the old Cologne against the superiority of the clergy; he carries the keys of the city on his belt. Third is the Jungfrau (maiden) representing Mother Colonia; her dress is designed after the outfit of the Roman Queen Agrippina who, according to legend, was the founder of the city of Cologne. The role of the Jungfrau is traditionally played by a male member of the Carnival Association.

These three ride the most elaborate float at the end of the parade. Other floats are mocking local, national and sometimes international politicians as well as past year’s news events. Public life comes to a halt and almost all workplaces are closed. Hundreds of thousands of people in costumes flock the streets.

On Shrove or Fat Tuesday (Faschingsdienstag) there are still some smaller parades in the regions but it all ends with the burning of a live-size straw man (Nubbelverbrennung). These bonfires take place in the streets and are supposed to be a symbolic burning of all the sins committed during carnival.
In Franconia (northern Bavaria) is where most of the action happens, but the capitol city of Munich has one of the largest Faschingfests in Bavaria. Most of the celebration takes place in the city center on Marienplatz and the nearby Viktualienmarkt with Tanz der Marktfrauen on Fat Tuesday. This well-known Dance of the Market Women began almost by accident in the 1800s. Ladies who normally run the market boots at Munich’s open air market take a break from selling and dress up and dance on a stage in the market beer garden: https://www.youtube.com/watch?v=LbM0wcy9SDw .

To all of you who do like Karneval: Alaaf and Helau!!!
Am Aschermittwoch ist alles vorbei! (All is over on Ash Wednesday).

One more advice for “survivors” of the crazy days: to soothe your hangover, try to eat some Heringsstip, a traditional northern fish dish with marinated herring and onions.