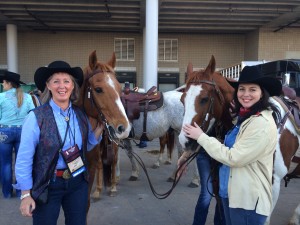 German Consul General Ricarda Redeker made history at the Houston Livestock Show and Rodeo last Saturday (March 5, 2016), when she rode in the Grand Entry of RodeoHouston on International Day. This is a first in the history of the rodeo and in the history of the German Consulate General and German-American relations in Houston – where else but in Texas – YEE HAW! CG Redeker is an expert horsewoman and has been riding a number of years. 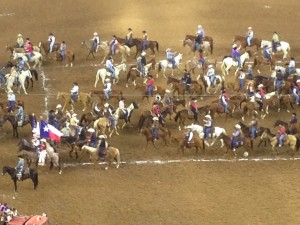 Grand Entry is the exciting opening to each and every RodeoHouston performance. When the gate opens and show officials appear on horseback, the performance has officially begun. Led by riders carrying the American and Texas flags, as well as the RodeoHouston flag, the winding trail of horses, buggies, carriages, hay wagons and fire trucks, brings a colorful exhibition of show officials, dignitaries, sponsors, volunteers and special guests to RodeoHouston fans nightly.  In the photo on the right, horses and riders mill around the stadium before getting into formation for the Grand Entry.

Following Grand Entry, a professional trick rider carries the American flag atop her horse for everyone to see around the arena. NRG Stadium fills with patriotic spirit as the audience stands for a stunning performance of the “Star Spangled Banner” and fireworks burst in the arena, signaling the start of the RodeoHouston performance.  If you haven’t been to the rodeo this year, or ever, you really need to participate in this iconic Houston event.  For more information check the earlier post at the German Institute for the Southwest or the official Houston Livestock Show and Rodeo website.