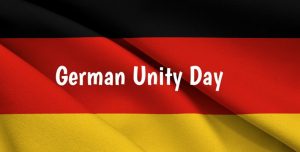 Do you know that on October 3 Germany celebrates the Day of German Unity (Tag der Deutschen Einheit)?

This national holiday commemorates the official German reunification in 1990 after it had been divided into East- and West-Germany in 1945. The fall of the Berlin Wall took place in 1989; in 1990 Tag der Deutschen Einheit officially sealed the end of the German division and the beginning of the end of the Cold War. This historic day is traditionally celebrated with a three-day festival in Berlin. Happy Days of German Unity!!