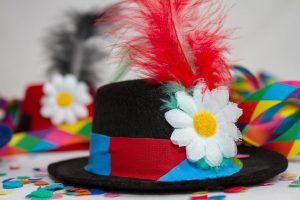 Karneval or Fasching is the season of eating, drinking and merriment before the fasting season, or Lent.

Often called the “Fifth Season,” Karneval in Cologne begins exactly at 11:11 a.m. on 11-11. While no public activities go on during Advent and Christmas, the costume parties, parades, masked balls, and satiric speeches (Buettenreden) and plays begin in earnest after January 6, and end at the stroke of midnight on Shroud or Fat Tuesday – the day before Ash Wednesday, the last day to indulge, imbibe, or in general misbehave before the long fast of Lent.