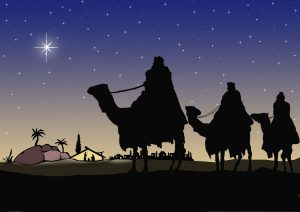 On January 6, the day commonly known as Heilige Drei Koenige (Epiphany), the adoration of baby Jesus by the three Magi is commemorated. They followed the star of Bethlehem to bring him gold, frankincense, and myrrh. It is a religious holiday in some German states, and parts of Austria and Switzerland.

Groups of Sternsinger (carolers), mostly young persons, dress up as the three wise men and go caroling from house to house with one of them carrying a star on a long staff. They present a blessing to the homeowner, and write 20*C+M+B*23 on top of the front door with chalk previously blessed in a church service.  The numbers represent the current year; the letters are abbreviations for Christus Mansionem Benedicat (God bless this house) or they could be the initials traditionally associated with the magi, Caspar, Melchior, and Balthasar. The “+” signs represent the cross. The carolers are usually rewarded with cookies, chocolate, or money for charitable purposes.