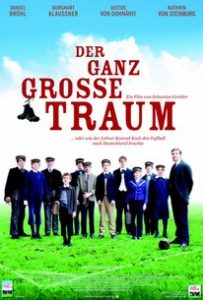 Join us for a great movie – Der Ganz Grosse Traum (“Lessons of a Dream”) on Thursday, August 11, 2016, at 6:30 p.m.at  the American Red Cross building (details below).  We think of soccer as a game that has been around forever, at least as a street game in Europe and maybe South America, but it’s been only a little over a hundred years that “Fussball” became popular and legal in Germany.  In Bavaria, home to the FC Bayern Munich, one of the most famous and successful teams in the world, Fussball was illegal until 1927.  Nowadays the sport is a national obsession.  Tens of thousands head for the stadiums and millions more are glued to the TV for German, European, and World championship games.

Der Ganz Grosse Traum (Lessons of a Dream) starts with the dream of one man in the Germany of Emperor William I. and Otto von Bismarck in the 1870s.   Dr. Konrad Koch, a teacher for Ancient Greek, Latin, history, and geography at a high school for the privileged in Braunschweig is an anglophile.  He had studied theology and philology at the universities of Goettingen, Berlin, and Leipzig, but learned English at an early age from his father, also a teacher.  In order to enliven the lessons and minds of his students, Koch teaches them “Fussball.”  The movie utilizes dramatic license with Koch’s biography by having him study in Oxford and visit England before he introduces the sport.  According to Koch’s biographer, Koch most likely did not visit England until the middle 1890s.  His enthusiasm inspires his students, and they become ardent fans of the sport.  Not so the teachers and parents – they view the game as subversive and as a plot to weaken the German social structure and the military state.  They use language similar to the one of parents and teachers when they described Elvis Presley and Rock ‘n Roll that enflamed the baby boomers not too long ago.

In the movie, Koch’s unconventional ways infuriate “influential parents, local dignitaries and, above all, his colleagues, who only believe in Prussian drills and discipline.”  They all are determined to run Koch out of town, and almost succeed, until the people who matter most to Koch come to his aid – his students. The movie is based on real events, has a first-rate cast, and tells the story of a “young visionary teacher who . . . changed his students’ lives . . . and introduced the game of football to Germany.”

We thank the Goethe-Institut of Boston to make the film available to us.

Do join the German Institute for the Southwest and the Houston-Leipzig Sister City Association for its showing of Der Ganz Grosse Traum (German with English subtitles) on Thursday, August 11, 2016, at 6:30 p.m. at 2700 Southwest Freeway (American Red Cross Building), Houston, TX  77098.  Registration starts at 6:15 p.m., the food and beverage reception at 6:30 p.m., and the film begins at 7:00 p.m.  the cost for the reception is $10 for members, $15 for guests, and $5 for students.  There is plenty of parking at the ARC location.